Amanda’s overall first quarter grade for Biology is determined based on her performance in each of four areas and is weighted as follows: 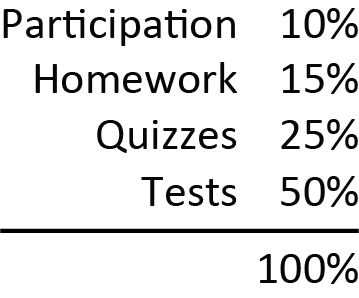 Based on this, for what percent of her overall first quarter average will each of Amanda’s six Biology quiz scores account? Express your answer to the nearest tenth.

If, together, the six quizzes account for 25% of Amanda’s overall first quarter average, it follows that each quiz accounts for 25 ÷ 6 ≈ 4.2% of her overall average.

Amanda scored 72, 86, 94 and 88 on the first four Biology tests this quarter. If each test is worth 100 points, what is the maximum test average with which Amanda can end the quarter after she takes the fifth test?