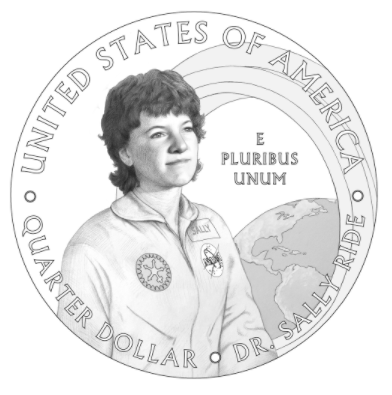 In honor of Sally Ride’s accomplishments and contributions to inspiring women in STEM, the U.S. Mint is releasing a quarter with her likeness in 2022 as part of the American Women Quarters Program.

On June 18, 1983, Sally K. Ride became the first American woman in space. Her first mission to space was aboard the Space Shuttle Challenger. It took 6 days, 2 hours, 23 minutes, 59 seconds for the shuttle to travel a total of 4,072,533 kilometers (about 2.5 million miles) during 97 orbits of the Earth. If the Sally Ride quarter will be 1.75 millimeters thick, how many of her quarters stacked have a height equal to 4,072,533 kilometers? Express your answer in scientific notation to three significant figures.

Sally Ride will be honored with a quarter through the American Women Quarters Program, along with Maya Angelou, Wilma Mankiller, Nina Otero-Warren and Anna May Wong. These five new quarter designs will be released consecutively throughout the year. If the order in which the coins are released is completely random, what is the probability that Sally Ride’s quarter will be released second? Express your answer as a common fraction.