This is a diagram of the first hole. 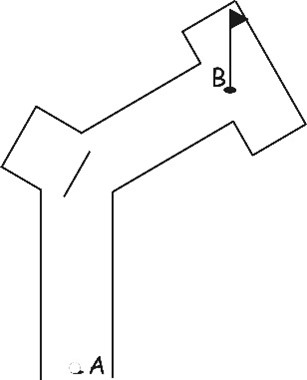 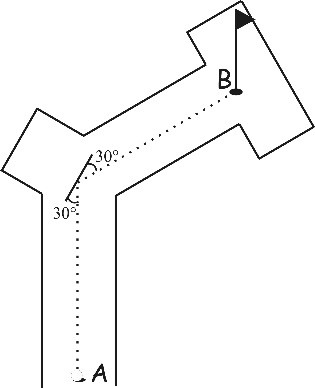 Because the path of the ball before and after it hit the wall were each 6 yards, we know that the triangle formed by drawing a segment from the ball's original position to the hole is isosceles. Let's label that segment AB. 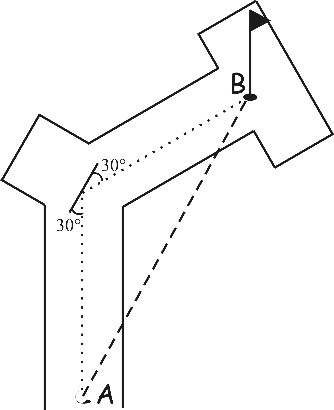 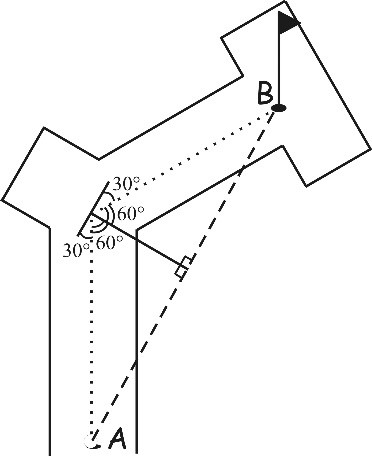 The next hole has a windmill as shown below. Gerald decides that he is never going to be able to time his shot right, so he decides to just randomly swing and hope that the ball makes it past the blades. If the end of each blade is 6 inches and the distance from the center of the fan to the end of a blade is 3 feet, what is the probability of Gerald’s shot making it past the windmill? Express your answer as a percent to the nearest tenth.

Notice that the path of the tip of the blades is a circle. To determine the likelihood of the ball randomly getting past the windmill, we need to see how much of the circumference of the circle is occupied by a blade at any given time. First, let's figure out the circumference of the circle: C = 2πr = 2π(3 ft) = 6π ft. Now, let's figure out how long the blade edges are all together: (6 in)(5 blades) = 30 inches. In order to figure out what fraction of the circumference 30 inches is, we need to convert the measures to the same units. Let's convert feet to inches: (6π ft)(12in/1 ft) = 72π in. Thus, the probability of Gerald's randomly timed shot hitting a blade of the windmill is 30/(72π) = 13.3%. The probability of his shot getting past the blades is then 100 - 13.3 = 86.7%.