Say the distance from point A to point B is 1320 feet. The driver in the red car looks up and sees the light at the intersection up ahead (Pythagoras Place and Archimedes Ave) just turned green. If that light only stays green for 25 seconds, what is the minimum average speed, in miles per hour, she must drive to get from point A to point B while that light is still green? 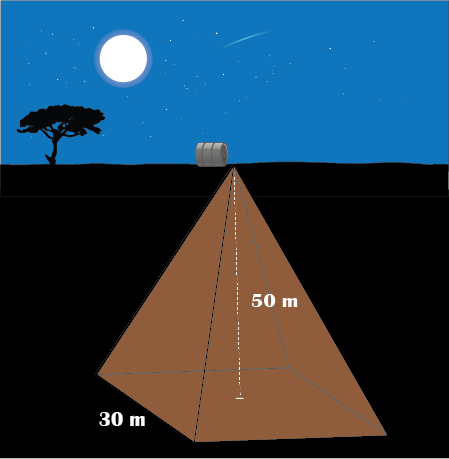 A drum of dry-cleaning solvent, a toxic chemical, is dumped and seeps into the soil, contaminating the groundwater below. This space where contaminants have spread is called a plume. Exactly one year after the solvent was dumped, the plume forms a square pyramid underground that has spread to a depth of 50 m and 30 m across at its base edge. What is the volume of the plume after one year?

When someone sends a text message over a communications network, receivers detect if any errors occurred when the message was transmitted. A checksum is one common algorithm to do this: it identifies if an error occurred, but does not specify which error(s) and cannot catch every kind of error. For example, if numbers were assigned to every letter of the alphabet (A = 1, B = 2, ..., Z = 26), and someone sent a message that said OK, the values of these letters would be O = 15 and K = 11. The checksum algorithm would verify the message being received had a sum of 15 + 11 = 26 and, if the sum were not 26, would identify an error in the transmission. However, if the message above came through as KO, the sum would still equal 26, meaning the checksum would not catch this specific error.

Vanessa texts René the message BAD. Assigning the same numbers to the letters in the example above, and assum­ing all three-letter arrangements are equally likely, what is the probability that René receives a three-letter message that has an error the checksum does not catch? Express your answer as a common fraction.